For scientific projects we often using knitr and R markdown in RStudio to share results and code either in HTML or PDF format. These are great tools for reproducible research. We find, however, that keeping all of our R code in an R markdown (.Rmd) file creates two problems. First, you need to completely re-run the report to evaluate new bits of R code and secondly the .Rmd file can become unwieldy very quickly. Fortunately, there is an easy way to make use of external code.

You would create an R script as normal and, within the R script, you create ‘chunks’ using the ## @knitr syntax. So, in this example, we create a new R script entitled example.R with two chunks (variablesXY and plotXY) that looks like this:

2. Create your R markdown script and refer to the external R script

Now you can create your R markdown (.Rmd) file. In order to read your external file you use the function read_chunk and then you can reference individual chunks using the <<chunkname>> syntax. So, continuing with our example, we can create a new file called myreport.Rmd, read the external file and reference/run the code chunks:

Although we usually use the syntax above which allows us to easily re-use chunks and flexibly name the R markdown chunks, there is an alternative syntax you can use. You can move all of the R code to the chunks in the external file and refer to those chunks in the R markdown chunk headers. For example, to produce exactly the same output as that above you can use the following for the example.R:

And then the myreport.Rmd can be simplified to look like:

In either case, the output would look like this: 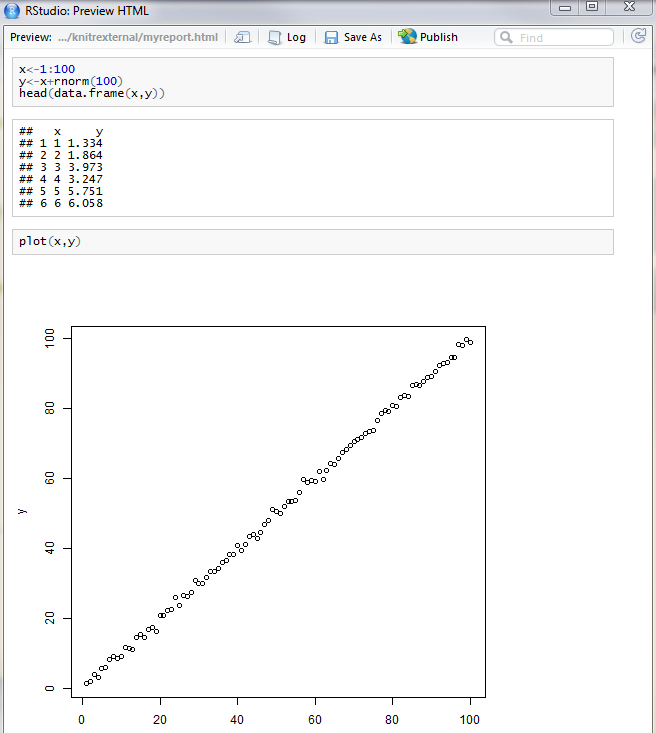 Run and show external code but leave off the comments

This was a tip provided by Bob Rudis. My external code often has comments that I don't want included in my final report but including code and excluding comments is tricky. To do this you add a couple of arguments to your code chunk, one is tidy=TRUE which tells R to tidy up the code (but leaves comments intact). The second is an argument to tidy.opts setting comment=FALSE. To a certain extent this is covered in Yihui's post on chunk options but the various setting available in tidy.opts are not spelled out there.

Run or show all code from an external script

I occasionally have a situation where I want to echo the code from a script but I don't want to run it. The simplest way to do this would be to copy and paste the code into a code chunk (and set eval=FALSE) but, of course, you would need to re-cut and paste if your code changes. An alternative to this, explained by Yihui at the bottom of this page, would be to use the code argument and readLines. So, as an example, to echo the code (but don't run it) from an external script called myscript.R in your Rmarkdown you can use: